With the Samsung Galaxy S5’s release date just a few months away, tech enthusiasts everywhere are eagerly anticipating what Samsung has in store. We’ve brought you tons of information regarding the company’s upcoming the flagship smartphone, including the processor, Air View technology, battery power and more. In staying true to our name, GalaxyS5US.com continues to publish all of the latest news and rumors surrounding the Samsung Galaxy S5.

Send Your “Thanks” To @evleaks

One thing that we haven’t talked about is the Galaxy S5’s home screen. Samsung has promised it will use a new and improved version of its previous S4 model, but they haven’t released any specific details. Earlier this week, however, famed cell phone leaker evleaks published an image on Twitter that appears to be the Samsung Galaxy S5’s home screen (see image below).

I know what you’re thinking: is this really the Samsung Galaxy S5’s home screen? There’s no confirmation by Samsung or any other party, but evleaks has a pretty good track record on reporting accurate cell phone details and information. He’s considered THE source for undisclosed information on upcoming cell phones, so there’s a pretty good chance this home screen is the real deal. 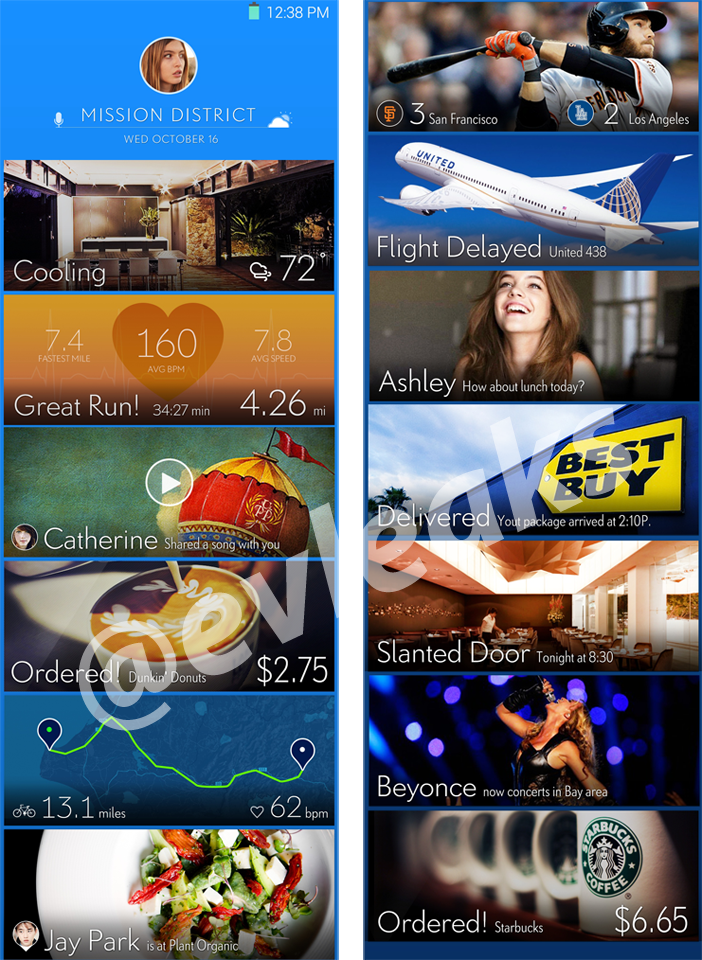 When evleaks originally posted the image to his Twitter account, he stated the following: “Samsung exploring a new smartphone UI.” Perhaps this is the real deal, or maybe it’s just one Samsung’s concept home screens they played around with before choosing a different approach. I guess we’ll have to wait a little bit longer to find out!

As you can see in the image above, the *rumored* home screen features a tiled design with about a dozen or so widgets. I guess you could say it’s a combination of Google Now and Microsoft 8, as it contains local information, flight details, apps and more. Personally, I think it’s a brilliant home screen design; it’s simple, attractive, informative, and hopefully functional.

One major difference between the Samsung Galaxy S5’s rumored home screen and Google Now is the tile size. Unlike Google Now, the home screen depicted in this leaked photo shows tiles of equal size. This subtle feature helps to balance the look and feel of the Galaxy S5’s home screen, offering a more user-friendly design.

What do you think about the new Samsung Galaxy S5’s home screen? Let us know in the comments section below!