Does the launch-edition Galaxy S5 feel a bit too heavy and/or bulky for your liking? Well, you’re in luck,  because the South Korean tech giant is reportedly working on a “Mini” variant of its flagship smartphone. The Galaxy S5 Mini will weigh less and feature a smaller display screen, and if the rumors are correct, it will also come with a reduced price tag. These are just a few reasons why some people are eagerly anticipating its release.

We’ve known about the upcoming Galaxy S5 Mini variant for some time, but recently Samsung published an image on their website confirming the existence of a smaller variant. The Dutch organization Galaxy Club published a screenshot of what appears to be a placeholder for the upcoming Galaxy S5 Mini variant on Samsung’s official website (see image below). Unfortunately, there’s no actual photo of the Galaxy S5 Mini, but the screenshot does reveal one important piece of information: SM-G800F build. 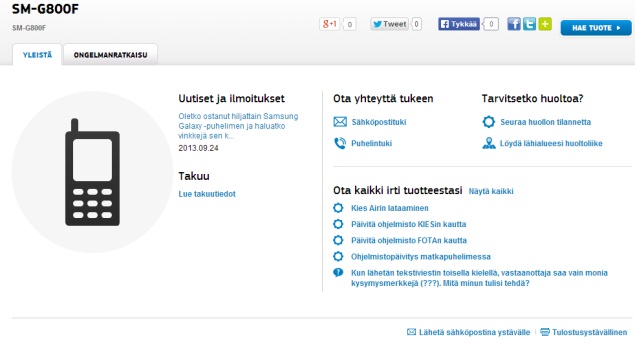 Being that this screenshot was taken straight from Samsung’s support page, we can only assume the company is preparing to release a Galaxy S5 Mini variant with the build SM-G8ooF. There’s been no official statement by Samsung — which is typical for the company — but analysts and tech enthusiasts alike believe this is the real deal. So, what can we expect to find in the upcoming Galaxy S5 Mini?

What We Don’t Know About The Galaxy S5 Mini

Will the Galaxy S5 Mini feature the same IP 67 (Ingress Protection) as the launch-edition Galaxy S5? This is something that remains to be seen. We certainly hope Samsung invests the additional money into making their Galaxy S5 Mini variant dust and water resistant, but this would raise the production cost of a device that’s already aimed towards a budget-conscious audience. We also don’t know if the Galaxy S5 Mini will come with a fingerprint scanner.

What kind of features would you like to see in the Samsung Galaxy S5 Mini? Let us know in the comments section below!