Today, we’ve got a serious release date rumor that’s for you. Having made its way around the mill only for a day or so, we’re not sure if this will grow legs or not, but we really, really hope it does.

Does Galaxy S4 Black Friday Price Mean S5 is on the Way?

RadioShack is selling the Galaxy S4 at $50. We checked to be sure, and it’s true. Galaxy S4 is available at $49 starting November 28. Currently, though, those who want a Galaxy S4 can use the Trade & Save program to buy it – and it might wind up a bit cheaper than buying it on black Friday.

There’s a catch, though. Calling it Trade & Save, RadioShack requires those who want to get the lowered pricing to bring in a smartphone that works and trade it for the Galaxy S4 and depending on the trade’s condition, you could pay anything from $0 to $99.

Testing the deal, the Trade & Save offered us $71.45 towards a purchase for a Sprint Galaxy S3 32 GB that powers up, is in perfect working condition, and is complete with charger. However, for the same phone with the same conditions, Radio Shack promised $132 and change. 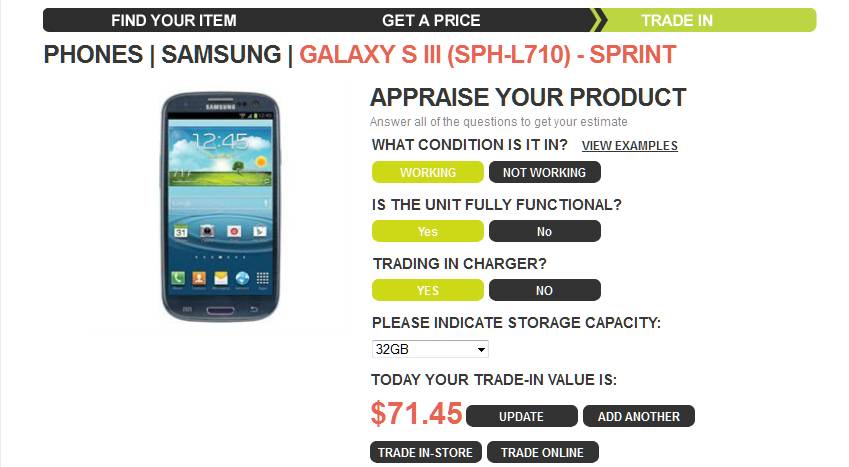 Though there’s a bit of fine print, essentially, those who are lucky enough to have a Galaxy S3 in perfect condition from Verizon to trade in can buy the S4 for about $7 right now since the regular Galaxy S4 price is $149 with a two-year contract. Why wait for November 28 if this price is a helluva lot cheaper than the Black Friday price?

What does all this mean?

To start, when retailers begin lowering prices to such extremes, they are trying to clear their storerooms to get them ready to receive new supplies. In this case, because the Galaxy S5 is the obvious successor to the S4, it’s obvious that Radio Shack is getting ready to receive a shipment of Galaxy S5 devices.

However, there’s only one problem with this assumption. We’ve seen other Black Friday deals leaked already, such as this one from Verizon, and they priced Galaxy S4 at $199 with two year contract – not even close to RadioShack’s price. While this could be because Samsung is offering the Galaxy S5 exclusively to RadioShack to sell, or it could be because Verizon is waiting for Cyber Monday to lower Galaxy S4’s price, we think it is more likely that Radioshack is willing to take a hit on their cost in exchange for pulling more people into their store.

In other Galaxy S5 news, The Korean Herald is reporting that Samsung and ARM met to discuss the 64-bit CPU plans for devices going forward in 2014. As we’ve mentioned previously, we believe that the Galaxy S5 will get a Exynos 6 64-bit CPU. Alternatively, it could get the usual Snapdragon 800 CPU, but again, these are just rumors.

What do you think about the Galaxy S4 pricing? Do you think it’s possible Galaxy S5 is on the way?