Unfortunately, that’s the rumor we have to serve up to you today, courtesy of Sulekah.com – though the report doesn’t mention the source giving them the information, they do make a credible argument as to why Samsung would do something like this – besides the fact the company would make a ton of money.

Back in July 2013, a few Samsung device users – various devices, not only cell phones – experienced the worst possible manufacturer malfunction. Their devices exploded for what they thought was no particular reason. Samsung uncovered and attributed the cause of the limited number of explosions to the different third party accessories that the users had connected to the device.

While the accessories were supposed to have been compatible, there was an apparent problem with the compatibility, not to mention with the quality of the manufacturing, which caused the devices to smolder, smoke and burn to a crisp. Toast, we’re telling you. 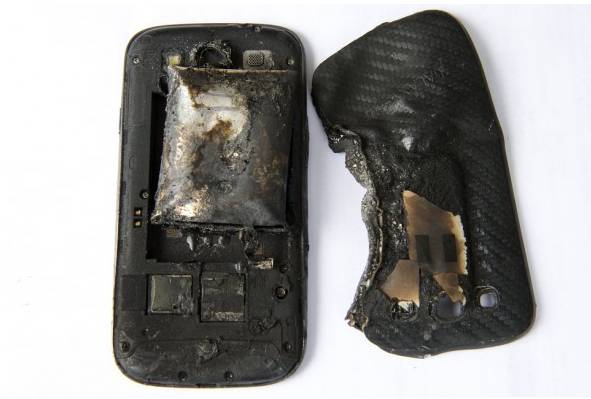 In fact, according to this NewLaunches.com report, an 18-year-old teen had a Galaxy S3 explode in her pocket – well, not exactly. It caught fire first and injured her so badly that she is still recovering from 2nd and 3rd degree burns over her right leg.

The teen said that the flames reached her shoulder they were so high, and she wasn’t injured more than she was because her boss (she was working at the time it happened) was able to help quickly enough.

While this is definitely a good reason to make third party accessories incompatible with the new Galaxy S5 when it is released, not to mention all Samsung devices, we don’t think that Samsung should do that at this point for two reasons.

First, Samsung Galaxy users would have to re-purchase all the accessories they already have, as would all users of Samsung devices.

This is not something that goes over well with consumers – trust us, Microsoft tried this with their new Xbox One. Not only did Microsoft reverse the decision to make users purchase all new accessories within two days of announcing the switch, but Microsoft also took a blasting from fans and the media.

The second reason that we think Samsung shouldn’t (and won’t) make third party accessories incompatible with the Galaxy S5 is because there simply aren’t enough accidents such as the one mentioned above for it to be an issue for Samsung. While every incident of exploding devices is a bad one, this is a numbers game and while it is a good thing for Samsung if users have to buy all new accessories, fans won’t be happy, and it could reduce sales overall of all devices.

For those and other reasons – not to mention that the Sulekah.com report doesn’t mention a single source to check out the information and whether it is credible or not – we think it is highly unlikely for Samsung to consider locking the Galaxy S5 t Samsung made accessories only.

Do you think Samsung will block access to third party accessories for Galaxy S5? Let us know below!