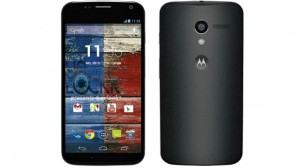 Motorola released a newly updated model model of its flagship smartphone, the Moto X, earlier this month. The new and improved 2014 model features several cosmetic and under-the-hood improvements. So, how does Motorola’s latest device fair against Samsung’s Galaxy S5?

If you were to compare the two devices side by side, you probably wouldn’t notice much (if any) of a difference in size. The Moto X features a 5.2″ full-HD display screen, whereas the Galaxy S5 is just a hair smaller at 5.1″. Both display screens are Super AMOLED with a high pixel-density resolution.

Both devices weigh roughly the same, with the Moto X weighing 144 grams and the Galaxy S5 weighing 145 grams. You shouldn’t notice any difference in weight between these two smartphones.

Now lets talk about the processing power that’s driving these two high-end devices. Again, there’s no clear winner between the two contenders because they are both powered by a quad-core Qualcomm Snapdragon 801 processor clocked at 2.5GHz.

The Galaxy S5 and Moto X both have 2GB RAM.

The Galaxy S5 and Moto X both run Android 4.4 KitKat. The only difference in software between these two devices is that Samsung includes its signature TouchWiz theme on the Galaxy S5. This adds a few helpful tools and utilities to the device which aren’t found in the Moto X.

There’s one area where the Moto X excels above the Galaxy S5: the price. Samsung’s flagship smartphone is currently being sold for roughly $600-$650 (without a contract), whereas Motorola’s latest flagship smartphone is being sold for just $500 (without a contract). That’s a pretty steep difference that may deter some people from buying the Galaxy S5.

Do you prefer the Galaxy S5 or Moto X (2014)? Let us know in the comments section below!