Or are they budget and Premium versions as we previously thought?

In a previous post, we talked about the rumor that AT&T is testing one of the Galaxy S5 variants. If the testing rumor is true, it would imply that AT&T will carry that specific device.

If AT&T indeed has a Galaxy S5 variant, then no doubt Sprint and T-Mobile will also carry the device, but they don’t require special technology for the device to be carried since they use much the same network and cellular technology – the GSM network.

However, the rumor only mentioned one of the two variants that are confirmed to exist, and didn’t mention which one.

We know there are two variants – the SM-G900A and SM-G900F, as these have been confirmed by the benchmark testing by AnTuTu and Browsermark, but what we don’t know for sure is whether the second device is a budget Galaxy S5 or something else entirely.

We previously assumed that the second variant would mean that Galaxy is getting a budget and a premium version, as iPhone did with its iPhone 5C and iPhone 5S, but when the AT&T rumor came from one of the most trusted cell phone rumor sources in the world, it got us to thinking…

Is there truly only one Galaxy S5 variant, or does this mean that the second device be built for CDMA and be headed to Verizon instead of being a budget/premium device variant like we previously thought? 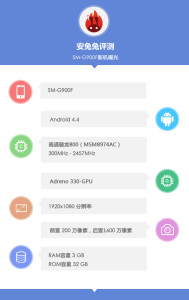 A Galaxy S5 headed to Verizon would make sense if you consider the facts about the cellular networks themselves and the confirmation that there are two variants, one of which AT&T is testing.

While a single network protocol runs between AT&T, T-Mobile and Sprint, and device with a single SIM card could port to any of those three networks, in order for a device to be available on the Verizon network, the manufacturer would have to develop and release an entirely different device with entirely different wireless protocols.

A specific technology on the market is made for such a situation, so that it is easier to be cross compatible. The chip on the market gives cellular devices the ability to work on any network worldwide.

If Samsung would add this technology and functionality to the Galaxy S5, the device would then be capable of running on any network the user wanted it on across the world.

Verizon uses an entirely different network protocol – CDMA – which usually requires the manufacture of a separate device built specifically to run on the Verizon network, but the technology would negate the need for a separate device altogether.

While it makes sense that Samsung would probably want to use the compatibility technology to help control costs, who’s to say that the two devices aren’t meant for separate networks?

Do you think Samsung will release a premium and budget Galaxy S5, or that it is going to Verizon?