We’ve got an awesome and interesting rumor that’s made its way through the mill today – this time about a potential candidate that could actually be the Samsung Galaxy S5 in the wild.

According to RightWare via PhoneArena, a new phone has made an appearance in the wild. The report notes that it is possible that the device in the wild could indeed be the actual Samsung Galaxy S5 candidate. 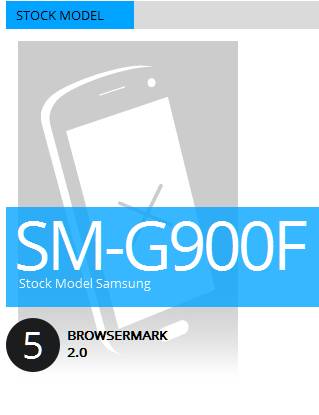 The device, a candidate form Samsung with the model number SM-G900F, was introduced to PhoneArena via the RightWare – a company that performs device performance reviews and sets benchmarks –  when it released benchmark results for a different device, the results were more than exciting.

In fact, according to RightWare, the company benchmarked a different device with an awesome resolution that is pretty much along the lines of what were are expecting any Samsung device to have -2560 pixels by 1440 pixels.

RightWare saw the SM-G900F using the Browsermark, and it came out the other end with admirable performance benchmarks, says PhoneArena.

Specially, the device landed in the top three spot, which is something else you’d expect from a Samsung device – especially considering the upgraded Exynos 6 octal core CPU, 4 GB RAM and the rest of its alleged soon to be released hardware packaged in a pretty durable casing.

While RightWare did not specially mark the candidate, it benchmarked without  any device details with the exception that it is indeed a Samsung.

Also included was the fact that it does indeed use Android, though the GPU, CPU, and resolution are unknown.

The company did make a note that the SM-G900F used Chrome for Mobile – Chrome 28 – instead of Chrome 31. Apparently, RightWare reported that using the updated version of Chrome would have made a huge difference.

Whereas now it comes in at the third spot, RightWare stated that had the device been running Chrome 31, it would have benchmarked in the top spot ahead of the Note 3 in second and iPhone 5S in the current benchmark top spot.

If it is not, one can only imagine the specs the Galaxy S5 benchmark candidate would feature – with he upgraded CPU and increased RAM, any version of the Galaxy S5 would have to benchmark better than the iPhone 5S at the very least.

In any case, whether this is the Galaxy S5 or not, the fact that there are two potential candidates out there in the wild that are confirmed Samsung phones means that the Galaxy S5 is sure to come soon, whether one of these is it or not.

Do you think either of these devices could be the Samsung Galaxy S5? Let us know!