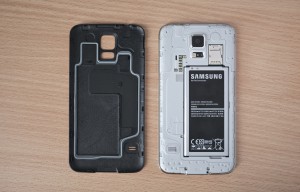 Ever wonder how much manufacturers pay to build smartphones? With retail prices for the Samsung Galaxy S5 teetering around $699 (without a contract), you might assume it’s expensive. According to a recent breakdown by the tech analysis firm IHS Technology, however, the 32 GB Galaxy S5 sosts $256 to build.

“Our main takeaway is that Samsung has been moved up to the higher end of the cost spectrum. It used to be that its typical flagship phone sold for $600 without a contract and had a bill of materials of about $200,” said IHS analyst Andrew Rassweiler when comparing the manufacturing cost of the Samsung Galaxy S4 to the S5.

On a rather surprising note, the Galaxy S5’s advanced fingerprint scanner only costs Samsung $4 to build. Critics have praised Samsung for building onto the core technology of the Galaxy S4’s fingerprint scanner, tweaking and improving it for the S5. This might naturally lead some people to believe that Samsung spends a hefty amount of money on the components for scanner, but the IHS Technology report reveals otherwise.

Of course, the $256 construction price presented by IHS Technology does not factor in costs associated with software licensing, royalties, and expenditures, all of which are likely to bump up the total cost of each Galaxy S5 device. Certain third-party apps and programs built into the Galaxy S5 may force Samsung to pay royalty fees. Samsung hasn’t disclosed this information, so we can only speculate as to how much it truly costs the South Korean tech company.

So, how does the Galaxy S5’s manufacturing cost compare to other leading smartphones? According to IHS Technology, the Galaxy S5 costs about $56 more to build than the Apple iPhone 5S. Most people who’ve used the two devices will agree, however, that the Galaxy S5 is faster, more powerful, and a better all-around device than the iPhone 5S, so I guess Samsung made a smart investment with their money.