While we were researching the information for our last post about the PLS LCD display and the possibility that Samsung is releasing a budget and premium version of its much anticipated Galaxy S5 smartphone, we ran across a interesting post featuring the Galaxy S5.

However, it did not contain a simple rehash of device or release date rumors, but instead featured an image of a new Galaxy S5 concept design in addition to a number of features and specifications to go along with it.

We showed you a variety of concept designs for the Galaxy S5 as fans and other tech experts would like to see it. Here’s a previous concept we told you about from MobileLeaks:

This time, the folks over at SIMOnlyRadar.nl created and released a mockup image of the Galaxy S5 features they would like to see when Samsung finally releases the device.

The conceptual image below comes complete with a variety of angles, and incorporates the previous rumor of a curved body or a wraparound display – apparently this is one feature a lot of people would like to see.

Check out the mockup from SIMOnlyRadar.nl:

So now that you’ve had a look at their idea of what the galaxy S5 should look like, here’s a rundown of some of the features and specifications they’d like to see as well. Let’s see if how they stack up against other Galaxy S5 specs rumors running around the mill to date.

The author notes that the concept specifications are based on the recent benchmarks, as we mentioned in this post, and that they did a regular straight body version and a flex body version.

Assuming that these features are for a premium version, it will feature:

Display: The straight body will contain a SuperAMOLED 5-inch display while the flex version will have a 5.2-inch display, and both will have a resolution of 2560-pixels by 1440-pixels

Cameras and Video: Both will feature a 16-megapixel main camera with optical image stabilization that will offer Full HD video recording at 160 frames per second and option to record in slow motion in addition to a front facing 2.5-megapixel camera.

User Interface/Mobile OS: Both the straight and flex version will offer a choice of Android Kit-Kat with the latest updates or Samsung’s own Tizen OS, and both will feature the TouchWiz UI on top. 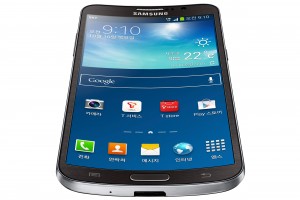 Could this be what the Galaxy S5 will look like?

In addition to the above features, both the straight body and flex style body will sport a USB 3.0 and aluminum body.

The above-mentioned conceptual specifications do not account for the possibility of a budget and premium version of the device, as we talked about in our last post.

If there are two versions, a budget and premium version of the Galaxy S5, we can see some changes being made such as two display types.

There’s also the possibility that the budget version will have less RAM and a CPU that’s not as powerful, but otherwise, we like this concept.

We do hope, that Samsung will release the anticipated Galaxy S5 soon, and until they do, we’ll keep bringing you the latest rumors and concepts.

What do you think about these conceptual specifications? Let us know in the comments!