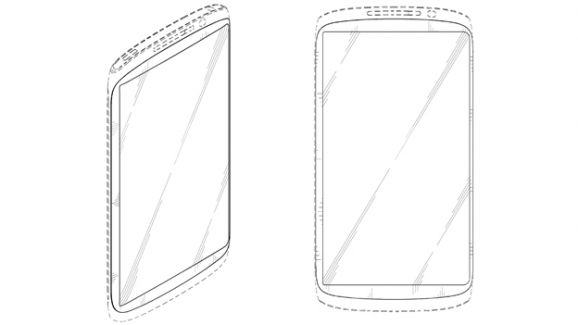 Last year, Samsung filed a patent with the US Patent and Trademark Office (see illustration above). This patent includes curved edges with a sloped screen. Up until now, Samsung has yet to use this patent, leading many tech analysis to believe it’s for the company’s upcoming Galaxy S5 flagship smartphone. A curved screen would likely improve ergonomics, offering a more natural and comfortable feel when holding the device.

Here are some of the ‘possible’ benefits of a curved display:

Of course, the Galaxy Note 4 may also feature the company’s patented curved screen display. Both the Galaxy Note 4 and Galaxy S5 are scheduled for release this year, so we’ll find out the answer to this question soon enough

Perhaps There’s Not Enough Supply For a Curved Display

Even if Samsung wants to use a curved display in their upcoming Galaxy S5 smartphone, the company many not have enough materials and resources to fulfill this request. A recent interview between Kim Jong-hyun and the Korean Herald revealed that Samsung currently has the capability of producing 500,000 curved screens per month, which would likely fall well below the expected demand for the Galaxy S5 once it hits the market.

Jong-hyun goes on to say that Samsung’s production capacity will likely double by the end of the year; however, even at this rate, the company may not be able to produce enough curved displays for each and every Galaxy S5 sold.

“The current capacity for flexible panels is not high enough for the Galaxy S5, which will be rolled out early next year. Curved ones will be unveiled late next year as a Galaxy variant rather than as a flagship model,” said Kim Jong-hyun, an analyst at Seoul-based Eugene Investment & Securities, to the Korean Herald.

Are you hoping for a curved screen on the Galaxy S5? Let us know in the comments section below!