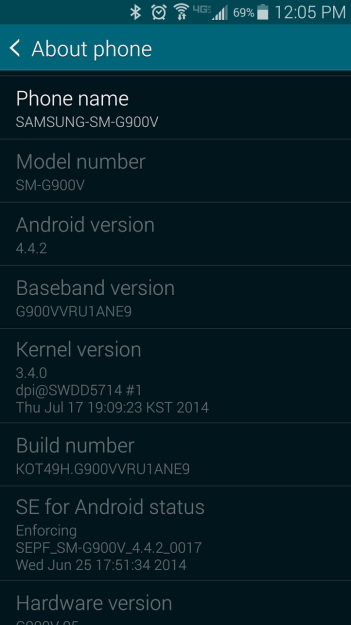 Galaxy S5 owners on Verizon Wireless may notice a new software build on their device in the upcoming days. Starting last week, the country’s largest cell carrier began quietly rolling out build G900VVRU1ANE9 to the Galaxy S5. While most of the changes made in the update are small, and it still runs the Android 4.4.2 OS, it still patches some security vulnerabilities while solving numerous bugs and issues reported by users.

Some of the fixes in the OTA update include the following:

It’s important to note that this OTA update may interfere with rooted Galaxy S5 devices. One user reportedly ran the update on a rooted Galaxy S5 only for it to break. There are obviously some risks involved in rooting, and this is one of them. When cell carriers push new updates, it may cause incompatibility issues with modded devices, so make sure your device is backed up! Alternatively, you choose to avoid this update if your device is rooted/modded.

This is still the same Android 4.4.2 as before, but Verizon Wireless brought well over a dozen fixes and improvements in its most recent OTA update for the Galaxy S5.

Are you running the latest Verizon Wireless OTA update on your Galaxy S5? Let us know what you think in the comments section below!