New details have surfaced regarding the specs for the Samsung Galaxy S5 Zoom. Samsung hasn’t officially stated plans to release a Zoom version of the Galaxy S5, but it’s safe to assume the South Korean company is in fact working on it. The Galaxy S4 was released in several different model variations, including a Zoom, so it only makes sense for Samsung to follow this same pattern with the Galaxy S5.

What We Know About The Galaxy S5 Zoom

According to the Polish website Galaktyczny.pl, Samsung recently held an invite-only presentation showcasing the Galaxy S5 Zoom. In an effort to prevent details of the new device from being leaked, Samsung prohibited its employees from taking photos. However, one savvy attendee at the presentation took some rather interesting notes which provide some insight on the upcoming Galaxy S5 Zoom. 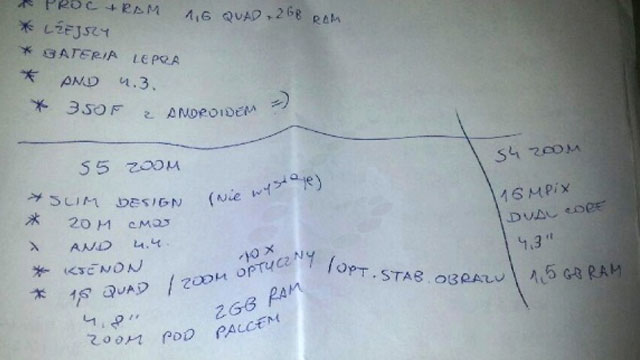 According to the Polish website, the new Samsung Galaxy S5 will feature a slimmer body with a non-protruding camera lens. This is in stark contrast to its predecessor, as the Galaxy S4 Zoom was large, bulky and featured a prominent camera lens. Some users preferred the Galaxy S4 Zoom over the standard S4 due to its larger body, but most people claimed it was too big. Samsung is likely trying to solve this issue with the Galaxy S5 Zoom by making it smaller and more compact.

What We Don’t Know

We still don’t know how much the Samsung Galaxy S5 Zoom will cost. If Samsung takes the same approach to the Galaxy S5 Zoom as they did with the Galaxy S4 Zoom, there’s a good chance it will cost $100-$200 more. Is a better camera really worth the additional cost? I guess that depends on who you ask, as some people use their smartphone’s camera on a daily basis, whereas others hardly ever use it.

Are you going holding out for the Galaxy S5 Zoom? We’d love to hear what you think about it in the comments section below!