It’s been over a month since Samsung unveiled its highly anticipated Galaxy S5 smartphone at the Unpacked 5 event in Barcelona, Spain and we’re still learning more about this amazing device with each passing day. The website Soyacincau.com recently published an article revealing the Galaxy S5’s potential use as a baby monitor. If you’re the parent of a newborn, or if you’re expecting a child in the near future, you can transform your Samsung Galaxy S5 smartphone into a baby monitor.

According to the article, the Samsung Galaxy S5’s menu contains a Baby Crying Detector option. “This function is intended to be used as a parenting aid and not as a medical device or a substitute for human care-giving.” It goes on to warn parents about leaving their babies unattended in homes or areas. You can find this option by navigating through the Galaxy S5’s accessibility menu. 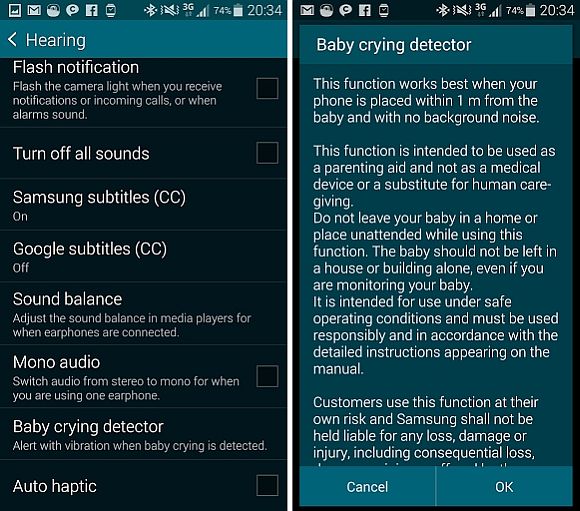 Screenshot of the Crying Baby Detector option on the Samsung Galaxy S5.

Samsung has kept quiet regarding the Galaxy S5’s baby monitor feature, which is why most people are just now hearing about it. This is pretty ingenious feature that’s an entirely new concept for smartphones. With that said, we haven’t had a chance to test it out yet, so we really don’t know how effective it is. If you’ve played around with the Galaxy S5’s baby monitor feature, let us know how well it performed!

The Samsung Galaxy S5 is packed with features, including a heart rate monitor, fingerprint sensor and now a baby monitor. And being that the device is still in its early stages of release, you can count on more features such as this being discovered in the months to come.

What do you think about the Galaxy S5’s baby monitor feature? We’d love to hear your opinion in the comments section below!