With the release of Samsung’s next flagship smartphone just weeks away, tech-savvy consumers from across the world are eagerly anticipating its arrival. We’ve covered some pretty interesting rumors regarding the upcoming Samsung Galaxy S5, including its processor, camera, RAM and more. One thing that we haven’t talked much about, however, is the price. While we still don’t know how much U.S. carriers plan to sell it for, a new chart published by idealo suggests that the Samsung Galaxy S5’s price will drop 24% within the first 3 months of its release.

The e-commerce price comparison company idealo published a chart on their website which shows the pricing trends of previous Samsung Galaxy models. Among other things, it reveals a common trends where the device lost roughly a quarter of its original value within the first 3 months of its release. The exact price difference varies depending on the particular model, but it’s pretty clear that all of Samsung’s Galaxy smartphones dropped a significant amount after just 3 months. 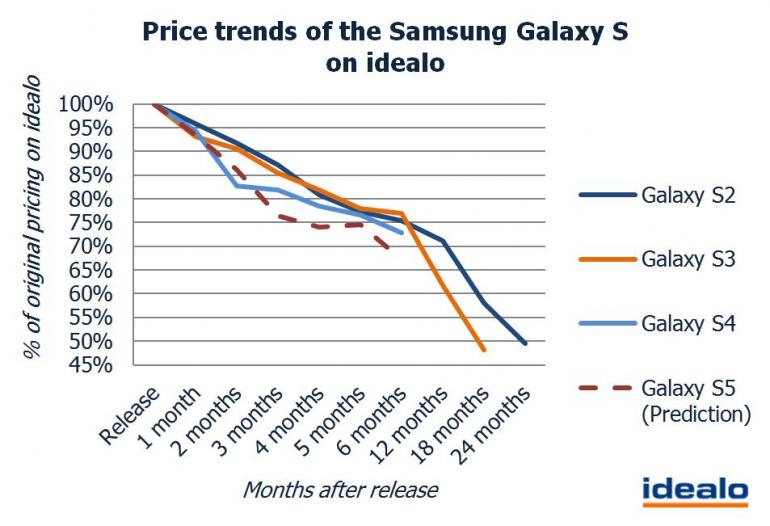 The idealo report states the following:

“Based on this data, we can predict that after just 3 months, the new Galaxy S5 could be available for just 76% of its original release price, which makes up a price reduction of almost a quarter, just three months on from market release.”

On a related note, you can see the massive price drop-off experienced by the Samsung Galaxy S3. From the 6-8 month period, it went from roughly 75% of its original price down to just 47%. Even the Galaxy S2 was able to hold its original value for a longer period of time.

Samsung released the Galaxy S4 in late April 2013, so there’s not a lot of data regarding its pricing trends. Using the previous Samsung Galaxy models, however, along with data currently available for the Galaxy S4, idealo was able to predict the price drop of the upcoming Galaxy S5. And given that idealo is a reputable e-commerce comparison company, it’s safe to say they know a thing or to about product pricing.

Should I Wait For 3 Months For The Price Drop?

I guess this depends on your current situation. Personally, I wouldn’t want to wait 3 months just to save 24% on the new Samsung Galaxy S5. Don’t get me wrong, I love to save money, but 25% isn’t enough to keep me waiting 3 more months.