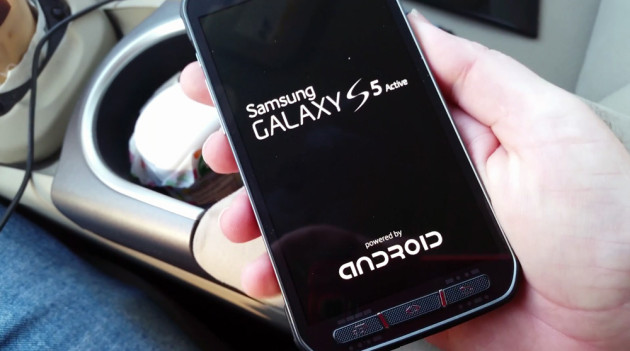 Most people have been eagerly awaiting the arrival of Samsung’s Galaxy S5 variants. We know they have an Active, Mini and a Premium variant in the works, but the company has not released any official statement regarding the release of these devices. However, a recently published YouTube video shows what appears to be the Galaxy S5 Active variant.

When Samsung launched its fourth generation Galaxy smartphone last year, many users complained about its lack of water-resistant technology. To solve this issue, the South Korean company released a water-resistant variant known as the Galaxy S4 Active. The Galaxy S5, however, featured water-resistant and dust-resistant technology right off the bat, leaving some people to question whether or not Samsung would even attempt to produce a Galaxy S5 Active. Well, it looks like they are in fact releasing a Galaxy S5 Active, because we have exclusive footage of the upcoming device below.

Check out the video above for a sneak peak at the Samsung Galaxy S5 Active variant. In terms of appearance, it looks quite similar to the Galaxy S4 Active — it’s thick with a solid yet ergonomic body for maximum strength and comfort. The video also reveals the device is carrying an AT&T Micro-SIM card, which is good news for the millions of AT&T users.

“Here’s a short hands on video with the s5 Active. Full hands on coming in the next few hours. New full hands on in 4K uploading now,” wrote YouTube user TK TECH NEWS.

So, what kind of hardware specifications can you expect to see in the Samsung Galaxy S5 Active? Being that this is the only video confirming the device even exists, everything is pure speculation as to what hardware it will include. With that said, rumors suggest the new Galaxy S5 Active will feature a Snapdragon 801 Qualcomm processor, 2 GB RAM, full-HD display, and it will run Android KitKat 4.4.2.

I think it’s safe to say the Samsung Galaxy S5 Active will also feather the same (or better) water-resistant and dust-resistant technology that’s found in the launch-edition Galaxy S5. There’s even a rumor circulating that Samsung will include a water-resistant earphone jack in the Galaxy S5 Active, allowing users to listen to music around pools, lakes, beaches and other wet conditions.

What do you think about the Galaxy S5 Active? Let us know in the comments section below!