When the Samsung Galaxy S5 first came out, it was considered by many to be 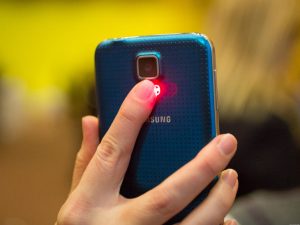 one of the most secure smartphones on the market. CNET had a nice breakdown of some of the anti-theft features worked into the phone, such as it being one of the first to have a built-in fingerprint scanner for improved personal security when opening apps and accessing programs. As with any new or improved smartphone features, it seems fair for users to question whether what was being advertised is actually necessary or just meant to boost sales and reviews. But in this case, the past year or so has seen smartphone security become more important than ever, as we increasingly trust our devices with personal information and financial handling.

In fact, to emphasize just how great the need for top-of-the-line smartphone security is, here are a few examples of apps and programs that can leave you vulnerable if not protected properly.

Banking apps are nothing new, but their capabilities have expanded significantly across the board. While these apps once existed largely to allow users to check on their accounts remotely, they now feature the ability to have complete control of bank accounts via mobile device. Consider the Wells Fargo app as an example. It allows users to check statements, make deposits, pay bills, transfer funds, and view account history and transactions. That’s quite a bit of information that most would prefer stay private and secure.

While many banking apps include the function of transferring funds to other users, there is a separate genre of payment apps such as Venmo and Paypal. These are services designed to help people pay one another, whether for professional goods and services or as reimbursement. They also tend to have direct access to a user’s bank account and they don’t require much more than a regular password to operate. Naturally, a phone that’s not secure that has these apps and programs loaded on it can leave its user very vulnerable financially, and this is one more reason that the Galaxy S5’s security features are actually necessary.

Much has been made of the growing trend of “freemium” games, which are free to download but filled with opportunity for in-app purchases. Basically, this means that it’s becoming easier and easier to spend money with the touch of a screen, even while playing a game. This seems like an unlikely target for mobile phone thieves and hackers, as no one really benefits from racking up your gaming expenses. However, there’s another sub-genre of gaming apps worth considering: mobile casino apps. Betfair bingo’s app provides a clear picture of the possible problem. On the surface, it’s a fun app offering basic bingo games and a simple, easy-to-use interface. Essentially, as you’re playing it feels harmless (and with proper security, it is). But when you consider the fact that game accounts can have direct connections to your bank account, it’s a game that carries similar risk, in the hands of a thief or hacker, to one of the aforementioned payment apps
.

All of these are clear examples as to why smartphone security is a very legitimate concern, and this is only talking about the financial side of the issue. There are also dozens, if not hundreds, of popular apps for things like personal schedules, contact information, notes, password storage, etc.,all of which people want convenient access to without forfeiting security or peace of mind.