We’re just days away from the possible unveiling of the Samsung Galaxy S5. If you keep up with our site here at GalaxyS5US.com, you’re probably well aware of the upcoming Samsung Unpacked 5 event, which we (and pretty much everyone else) believe Samsung will use to display their Galaxy S5. They’ve launched previous Galaxy models at Unpacked events in the past, so it only makes sense for them to launch the Galaxy S5 here as well.

We’ve learned a lot about the Galaxy S5 through leaked photos, rumors and insider information. Recently, though, we heard from a source who claims the Galaxy S5 will feature a bigger and sharper screen than its predecessor. This is a huge development considering the Samsung Galaxy S4 was already touted as one of the biggest smartphones on the market (see image below for Galaxy S4 vs iPhone 4 comparison).

How Big Is The Samsung Galaxy S5?

Just how big is the upcoming Samsung Galaxy S5? Although we don’t have any official confirmation on its size, we’ve heard from several reliable sources who claim the new flagship smartphone for Samsung will feature a whopping 5.25-inch screen. No, that’s not a typo —  if our sources are correct, the Galaxy S5 will have a 5.25 inch screen.

The Samsung Galaxy S4 currently features a 5-inch screen, which is more than enough ‘real estate’ for most users. So, why did Samsung choose to make the screen even larger? When it comes to smartphones, size matters. People want smartphones that are large enough to browse websites, watch videos and perform other functions. Some of the smaller smartphones on the market aren’t able to effectively perform these functions due to visual constraints. Even if websites load in a small device, you might have to squint to read it.

Of course, not everyone is thrilled with the Galaxy S5’s larger screen. “For me, better specs don’t cut it. They need to find a way to get users to pick the Samsung brand across different types of devices to better compete with Apple,” said Roberta Cozza, an analyst at Gartner Inc. I personally think the Samsung Galaxy S5 will blow the current iPhone 5S and probably the future iPhone 6 out of the water, but I guess we’ll have to wait a little bit longer to find out! 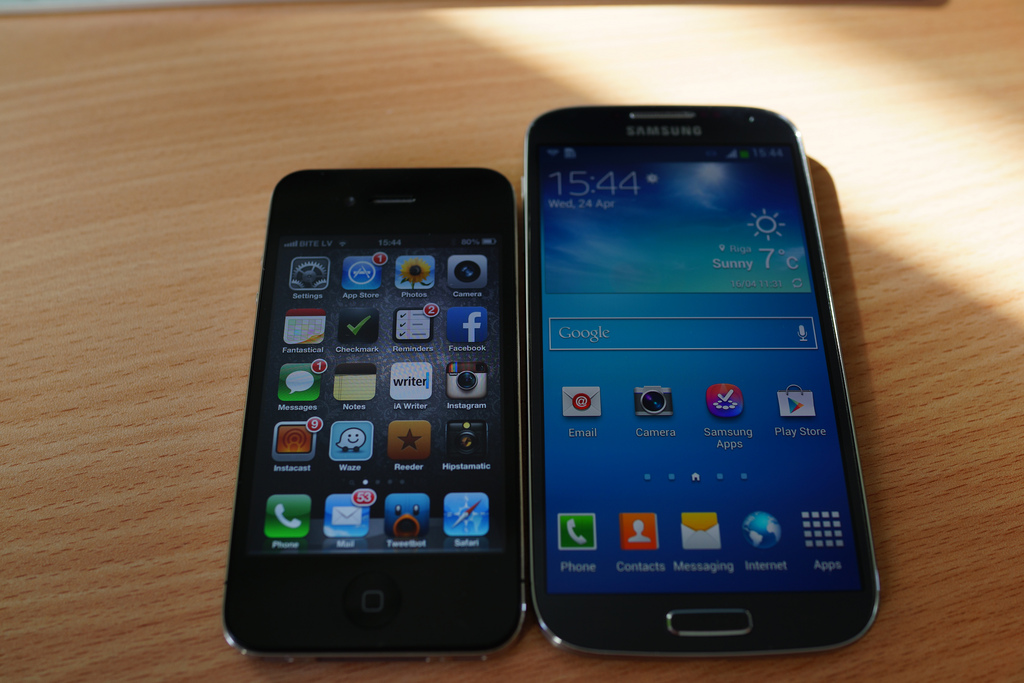 Samsung Galaxy S4 with 5″ screen next to the Apple 4.

What do you think about a 5.2″ screen on the Samsung Galaxy S5? Share your opinion in the comments section below!